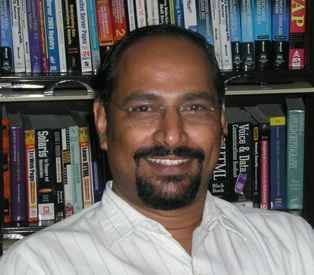 Vinod Balakrishnan is a Professor in English in the Department of Humanities and Social Sciences at the National Institute of Technology, Tiruchirappalli. He is a practising poet, motivational speaker, reviewer of books and a yoga enthusiast. He earned his Ph.D in “Popular Fiction and the Use of History” from Mahatma Gandhi University, Kerala. He was a Fellow at the School of Criticism and Theory at Cornell University, New York in 2008. He is a recipient of a Bronze Medal for poetry by the National Library of Poetry, USA. His poems have been archived and widely anthologized. He is the author of Indian Classics in English Translation and has coauthored a book on Literary Theory. He is also the General Editor of the 12-Volume Encyclopaedia of World Mythology (2013) in Malayalam. His articles have appeared in HUMOR, Catalan Journal of Communication and Cultural Studies, European Journal of Humour Research, Partial Answers,  The Journal of Creative Communications, Journal of Dharma, Pragmatism Today, Archiv Orientalni, a/b:auto/biography studies, Rupkatha Journal on Interdisciplinary Studies in Humanities,  South Asian Review, Journal of Somaesthetics, LitCrit, Indian Literature, CIEFL Bulletin, Journal of English Language Teaching and Indian Express. His research interests include Somaesthetics, Politics of Representation, Film Studies, Life Writing and Narratives about India. Currently, he is working on “The Role of the Public Intellectual and the Future of the Humanities”.

Poems published by the Poetry Society of India

2008: The School of Criticism and Theory (SCT) at Cornell University, Ithaca, USA.